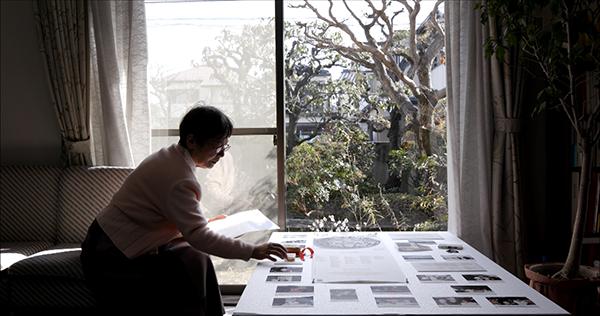 —Burden that imprisoned the legendary female artist (2020) by Minami Goto
A contemporary artist and composer, Shiomi Mieko, 81, joined the global avant-garde art movement Fluxus in the 1960s in NYC, and has been active until this day. As a young female artist cultivating her career in the art world, one would wonder how she survived in a world where equal opportunities were, presumably, unavailable for all sex. She replied; “I have never thought about issues about gender.” Her acute statement fueled my curiosity to learn more about Shiomi, and booked me on a journey to learn her thoughts. (…)
One of the most unforgettable instances with Shiomi, was when she mentioned “Gender doesn’t matter in the creative world.” This phrase kept me pondering, as we all subconsciously feel that the work itself is indeed, what matters and does not depend on the artists’ gender. However, the reality is that many female artists give up on their passion, due to their gender.
Reflecting back, headlines such as “female artists” are frequently used, which implies the aspect of gender in the male-dominated industry.
Shiomi shared that when she entered college, her department had a fixed student quota of men and women that was unfavorable for women. This is an agonizing truth that a freshman had to accept. Regardless of such challenges, Shiomi kept overcoming them with her dedication, talents, and hard work. I believe that her way of fighting encompassed the fulfillment of her duty as a daughter, a wife, and a mother while never giving up on creative activities as an artist.
On the other hand, what happened to these women who were deprived of the opportunity to learn? Perhaps they couldn't even choose nor try to start their career.
This discrimination and inequality still exist today. In fact, when I was working in the art industry, I have seen senior female artists who had married or given birth lamenting that they couldn't find the time to focus on their creation. Often, these artists carried more burden of housework and childcare than their husbands. That made me anxious and worried – “will I be like them? Getting overwhelmed with house chores and childcare and never having my own time to create?”. This anxiety still remains deeply in my subconscious mind.
In any era, there are always ways of fighting. Individual artists need to continue creating, strive to create better work, but imminent issues and obstacles exist, and we can only solve this when we unite, and work together for better opportunities for young artists.
What is our fighting stance? I believe that dwelling on such a question is in itself, a way of fighting.
※Extract from director’s note for a short documentary film on Mieko Shiomi, Shadow Piece, co-produced by jwcm
＊ WATCH『SHADOW PIECE』＊
(Password: shadow)
↓click image ↓

SHIOMI Mieko
Born in Okayama, Japan, in 1938. While studying music at the Tokyo University of the Arts, she formed Group Ongaku, an experimental music group, with Takehisa Kosugi and others. In 1964, she moved to the U.S. to join the Fluxus movement; began the "Special Poems" series in the following year. Since she settled herself in Osaka, Japan, in 1970, she has composed a number of chamber music piece with performative actions. Her activities also include performing music and creating visual works.  ​​​​​​​

GOTO Minami【Director]
Japanese filmmaker Minami Goto is obtained an MFA degree at Columbia University in the City of New York on scholarships. She holds a BA in Art History from the University of Tokyo where she produced a series of film screenings and events. Minami is a recipient of the Avex Digital Award (the best award at the script and pitch competition at Short Shorts Film Festival & Asia) and Jack Larson Award for Collaboration. She is also an alumna of Fantastic Film School 2020 at Bucheon International Fantastic Film Festival and Kyoto Filmmakers Lab 2020. Minami is now based in Tokyo, Kyoto, and Shizuoka. https://minamigoto.com/